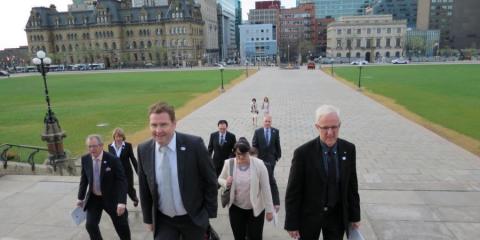 On May 5, during Vision Health Month 2015, CAO Council and Ottawa area ODs once again descended upon the parliamentary precinct to discuss policy issues related to vision health with Parliamentarians.

It has been one year since the federal government gave official recognition to Vision Health Month, and Doctors of Optometry have continued to highlight the importance of healthy eyes to Canadian’s of all ages.  Despite the importance of vision, it is often over looked when people are managing their health.

The Lobby Day began with a Parliamentary Breakfast Reception, which featured free retinal scans, a keynote address by Dr. Paul Geneau, President of CAO, and the awarding of the prestigious CAO Vision Champion Award.

The remainder of the day was filled with face to face meetings where CAO representatives met with members of Parliament, Senators, and their staffers.  CAO Council and staff members were able to discuss the role of the optometrist and the importance of a national vision strategy to properly address better access to vision care services.  Also on the agenda was the importance of raising awareness of vision health to all Canadians.   Council members took the opportunity to encourage the federal government to draft and submit the second stage of regulations for Bill C-313, An Act to amend the Food and Drugs Act (non-corrective contact lenses).  This is one of the last steps towards making the bill operational. Early reports indicate that the Minister of Health has received several requests from MPs to move the bill along.

This Lobby Day provided a great opportunity to foster new relationships, share optometry’s perspectives and ask for a federally-funded public awareness campaign on vision health to compliment national vision guidelines.  The interest, advice and support from parliamentarians of all political parties in both Houses, helps to ensure that CAO’s future lobbying efforts will continue to grow and flourish.

On Wednesday May 28, 2015 Senator Wilfred P. Moore (NS) rose in the Senate to extend his congratulations to former Senator Asha Seth and the Canadian National Institute for the Blind for their work in bringing the importance of vision health to public attention. He went on to speak to the activities of the Canadian Association of Optometrists and our work in recognizing individuals and organizations who champion the cause of healthy eyesight. To read the Senator's full statement, please visit…